“PPS taught me to challenge the norm so now I can forge a path that’s my own.”

A critical lesson for teenagers on the road to adulthood is learning to act on their own beliefs and values instead of just following peers. Luci S., a member of the Casco Bay High School Class of 2017, says that school helped her learn to do that.

“The thing that’s really amazing about Casco is that it really encourages you to break away from the mold and not feel pressured to run with the herd,” Luci said. “It’s a great community that allows you to forge your own path.”

Luci, 18, is now forging a unique path by taking a “gap year” instead of attending college right after high school. She’s headed to Switzerland, where she’ll work as a childcare provider at an international school. She’ll be meeting people from around the world and hopes to learn German, travel and do some skiing.

Still, Luci persevered because she believes a gap year is right for her. She wants to travel, gain new experiences and have time to figure out what she wants from college and career.

“I love adventure,” she said. “The Portland Public Schools taught me how not to be afraid to choose the road less traveled.”

Luci was in Hall’s Many Rivers program, which she said uses project-based “expeditionary learning” of the type used at King and Casco Bay. Both those schools are part of the EL Education (formerly Expeditionary Learning) network and are models for schools nationwide.

The Portland Public Schools stands out in letting its eighth graders decide which of its three high schools – Deering, Portland or Casco Bay – to attend. Each school has unique strengths. At first, Luci considered Portland High. “All my friends were going to Portland,” she said.

But her brother attended Casco Bay – he graduated in 2014 and now attends the University of Maine – and she liked what she heard about Casco from him and his friends. Luci decided to forge a different path from her friends – and chose Casco.

“I was definitely a little more skeptical in the beginning, but in the end, I thrived,” Luci said. She liked that Casco Bay is small – it has only about 400 students in grades 9-12 – and she felt at home with its expeditionary learning style. “My personality fit a lot better with it,” Luci said.

Among key experiences was her class’ “Junior Journey” to Detroit, Michigan, where residents are trying to rebuild that blighted, Rust-Belt city. The students engaged in community service in Detroit and produced a documentary.

“In that trip, Casco gave us a different way to see how people live and it took us out of this kind of bubble we’re in, in Maine,” Luci said. “We were able to talk to some people and hear their stories and hear where they’re coming from. It made me kind of rethink what’s important in life and in education.”

Academically, she said, Casco offered students a wide variety of learning opportunities. For example, Luci studied American Sign Language at the University of Southern Maine and become an AmeriCorps volunteer at East End Community School, where she tutored and mentored young students.  “It never felt limiting, being at Casco,” said Luci, who also skied and played soccer and lacrosse.

The Portland Public Schools is Maine’s largest and most diverse school district and Luci found the diversity a bonus. “I loved it,” she said. “I made some amazing friends who were from all kinds of different places. I think that’s such an important part of learning – to be able to work with people from different backgrounds.”

She believes that experience will help when she goes to college – and in Switzerland this coming year. “I’m excited to go to place where there’s people from different cultures, because I feel like I’ve learned how to sometimes bridge the gaps between cultures that are often separated because of our society,” Luci said.

She would recommend Portland’s schools to anyone seeking a unique learning experience. “Portland Public Schools give you options, and that’s something that other communities don’t necessarily provide,” Luci said. 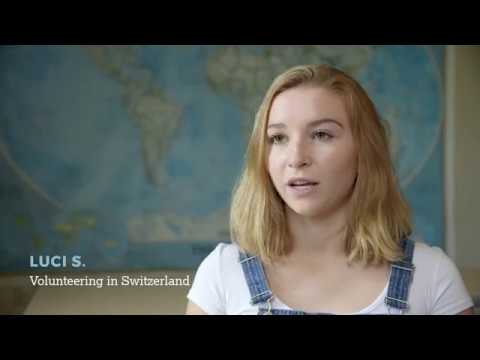