“PPS taught me engagement so now I can engage others in the community.”

Salim Salim, a 2016 Deering High School graduate who is now a student at Bowdoin College, wants to make a career of helping immigrants like himself. “I want to play a role in making the education system better for people from my community that are underserved, underrepresented and undervalued,” said Salim, who is from Iraq.

He plans on a double major in government and legal studies, concentrating on international relations; and in education, with a concentration on policy. One career he is considering is becoming an immigration attorney. He’d like to work for global organizations that promote peacekeeping and provide legal assistance.

Salim credits the Portland Public Schools – especially Deering – with being a welcoming and inclusive community where he was able to learn to be a leader.

“The Portland Public Schools have taught me to find the value in my difference so now I can use that difference to make a change in my community,” Salim said.

Salim’s elementary school education was a mosaic of different schools, countries and languages. He started school in the Iraqi city of Mosul. Then, for safety reasons, his family moved to Kurdistan, where he attended an Arabic school that also taught Kurdish. The family moved around again and ended up in Turkey as refugees for the United Nations. There, Salim had to learn Turkish and catch up on missed schooling.

In 2010, his family immigrated to Portland, where they had a sponsor. Salim started sixth grade at Lincoln Middle School.

At first, he was so busy learning English and adjusting to life in America that he stayed in his “comfort zone” – socializing mostly with family and other Iraqis.

“The middle school stage was mostly getting to know my position in the community I was placed in,” Salim said. “I didn’t care about education or reform or politics, because I was too busy trying to establish myself to worry about someone else.”

High school was a transforming experience. “When I got to high school, I felt more established,” Salim said. “I decided to step out of my shell and my comfort zone, and I think the Portland Public Schools have done a great job in preparing a place for me to do that.”

That place was Deering, which bills itself as the most diverse high school north of Boston. “There were many people that I was able to interact with and learn from and vice versa,” Salim said. “I felt like my education there wasn’t just based on the four classes that I’d take every day, it was everyone in the classroom.”

Also, Salim said, Deering “sparked my interest in learning outside the classroom.” For example, he joined organizations such as Seeds of Peace, which helps students learn leadership skills and become leaders that instill change in their communities in hopes of making a more peaceful world.

In fact, Salim said, “a lot of my time in high school was invested in helping myself build leadership skills. The first two years I decided to learn how to become a leader, and in my junior and senior years of high school, I decided to be a leader.”

He was student body president during his senior year and, with other Seeds of Peace members, facilitated dialogues at Deering and other schools. At one point, they traveled to Presque Isle to lead a discussion with high school students about new Mainers like himself.

Salim in high school was at first placed in a low-level English class as a freshman. He wanted more challenge, and was able to switch to a college-prep class, where he earned top grades.

Salim praises the district, where his younger brother is a Deering student. However, he said, “the one thing I would push for is for ELL students to be given more challenges.”

This year, as part of its new Comprehensive Plan, the district has an Equity goal. Among steps to achieve equity is opening advanced-level classes to more students.

Salim participated in Make It Happen!, a Portland Public Schools college-readiness and academic success program for language minority students. He credits the program’s director, Tim Cronin, and some of his teachers, with “seeing the potential in me and really pushing me.”

He’s grateful because that helped give him the confidence to succeed in college. At Bowdoin, Salim said, “I am pushed to do things I never thought I could do.” 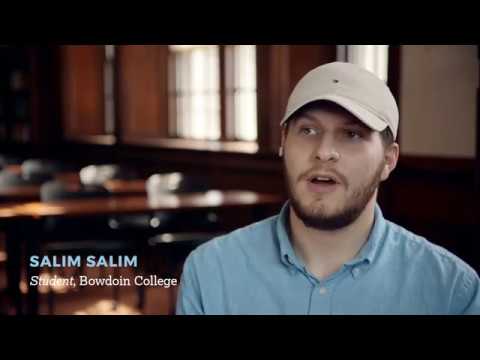